I read somewhere a blog post about a quick 30 minute photo challenge. The basic idea is you walk for 10 minutes, any direction you fancy, take photos for 10 minutes of what you find there, and then walk back home, which should take you approximately the final 1o minutes of the 30.

This time and location restriction should really focus your eye on capturing subjects in short space of time. No faffing about with different gear and gadgets, just get there and start snapping.

I fancied having a go, so at lunchtime today I put on a hat and coat, picked up my camera, and walked for ten minutes and started shooting. Here are the results.

I quite enjoyed completing this challenge today. I only used one lens, my trusty 50mm, for this. I think I’ll have another go at this but each time try a different lens, just to mix things up a bit. I’m thinking that a macro lens will really lent itself to this sort of challenge, so may try that next.

I’m not a vegan, nor am I claiming to be one. I’m your classic omnivore, although I do seem to have developed a number of sympathies to the vegan way of thinking of late. Recently, my work has taken me away from home a lot, and this has included a lot of motorway driving. Passing the trucks on the way to the slaughterhouse, scared snouts and noses poking through the gaps in the crates makes me feel sad; seeing the trucks empty even more so. I toyed with vegetarianism for just over half a year in the 1990s, but once I fell off that wagon I never tried to get back on it.

The more I’ve been thinking about these issues, the more I’ve been wanting to make a change. I decided in October that I would do something about it. When I’ve been working away, which has been a lot during the latter part of 2016, I stopped buying and cooking meat. I would not claim to be a vegetarian for those three or four days per week, there was no announcement or change of lifestyle, I just stopped buying meat when I went shopping, and would experiment with solely meat free ingredients whist preparing dinner. No big deal.

When I’m away and cooking, I’m generally looking for something I can take a photo of. I’ve spoken before about my yearning to improve my skills with food photography and I need to practice. Also, I don’t like to post too many pictures of meat dishes on social media. I understand it can be quite a divisive subject, with many strong opinions on all sides. So, one November evening I decided to cook something for dinner, without meat, specifically so I could take a photo or two to share. I was looking for something with a mixture of bright colours, plenty texture, and steam, just as an exercise in backlighting the steam for maximum effect. The resulting dish was a stir fry, as seen here. 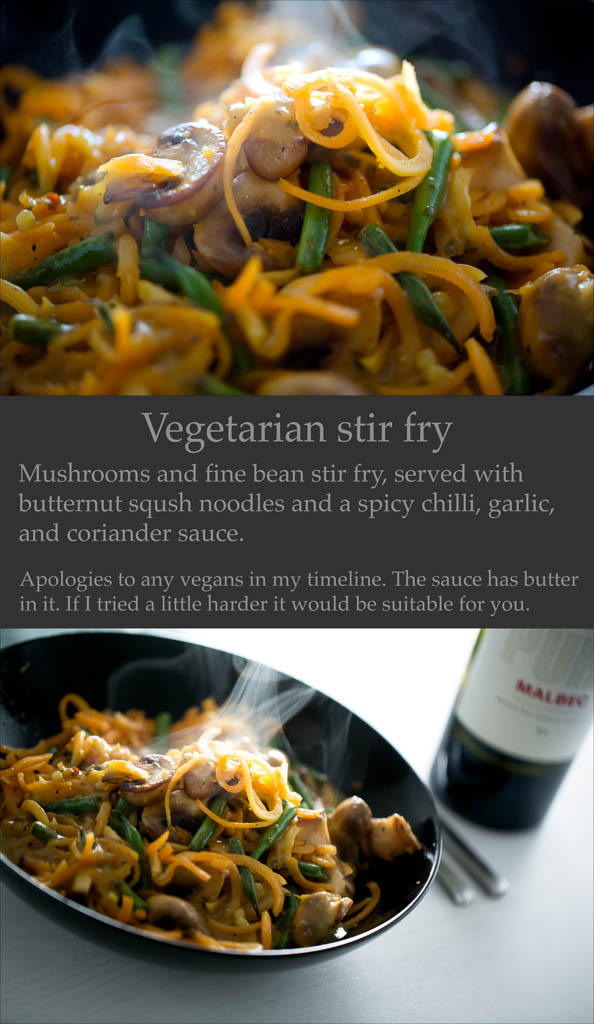 As I was writing the copy for the photo I realised that had I not used butter when creating the sauce, as well as being suitable for vegetarians, this dish would have also been vegan friendly. Had I made a little more effort or put a tiny bit more thought into it, this dish would have been suitable for a much wider audience. Oh well, it wasn’t my intention to create a vegan dish, just to take a nice photo and enjoy my dinner. This did however get me thinking about trying to cook some vegan food that would look good for a photo. I decided to give rice pudding a go because, well, because it’s rice pudding and I bloody love that stuff.

After some careful research into the ingredients – who knew that some sugars are filtered through bone charcoal – I was all set. I cobbled together a recipe from a few other, non vegan ones I found on line, had a practice, did a bit of fine tuning, and ended up with this.

Pop all of the ingredients into a pan, and get it on the heat. Once this is going you will need a very low heat. Cook it for about 45 to 60 minutes, until the rice is soft and scrumptious. Don’t leave this simmering alone for long periods of time or it will stick to the bottom of the pan.

If the mixture is a little too thick for your liking then loosen it with a little more milk or water.

I chose to top my rice pudding with some of the Co-Operative’s “Extra fruity strawberry conserve” from their “Irresistible” range, and also grated some freshly ground nutmeg on top. Next time I may try some Tate & Lyle Golden Syrup instead. You could of course choose to simply enjoy it as it is. 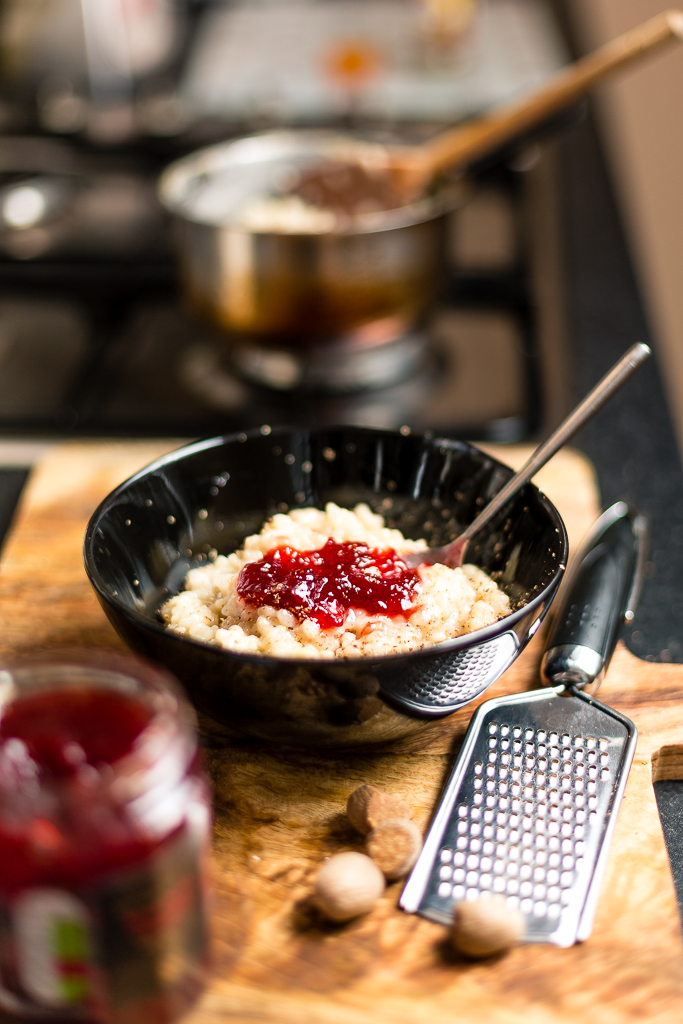 Please feel free to comment in the comments section below if you have any questions, if you tried this and liked it.